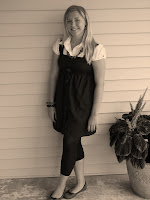 We all know that being a parent is one of the most exhausting roles we can have. We pray for a little one to fill our arms, only to be totally amazed that such a little person can go through a room that has just been picked up and make you feel as if you have never lifted a finger. We tearfully watch as they turn school age and slowly gain more independence and for the most part the approaching years seem to provide a small amount of relief as we watch them grow and learn. And then one day the child that seemed to move from one clothing size to another year after year suddenly has an unbelievable growth spurt in which you now wonder if it is your destiny to give away perfectly good clothing. And before you know it, what is standing before you is the shape and size of an adult, but is still growing in wisdom.

This is where I am at with my oldest daughter.


Oh, how I would love to share about some of our conversations. They are so precious and I am trying to take mental notes, listen well, and jot down some of things she is sharing. I would never want to embarrass her, so I will have to keep these to myself for now.

Today when I picked her up after speech practice, we had one such conversation. I saw a small growth in maturity and was so thankful for the way she was trusting the Lord for things to take place in her life. (you may be thinking this has to do with boys, but it didn't) I don't take these little things for granted, and I am thankful to the Lord each time she expresses her desire to walk in His ways.

Often times when our kids are teens, we are so concerned about what they might be doing, that we miss what they are not doing. I often find myself wanting to focus only on those areas that lack wisdom and understanding, and sometimes fail to acknowledge so much of the good stuff.

Tomorrow she is participating in her High School's individual speech competition. She was originally set up to perform one speech in the acting category, but today fifteen minutes before their practice concluded, her speech coach (while looking directly at her) told the group that one of the students had dropped out in the story telling category and she was hoping someone would be willing to take her place. My daughter responded to her direct eye contact and agreed to pick up a second speech. So, here it is Friday night and she is upstairs rehearsing for this second speech. She told me in the car that her coach was elated that she would be willing to do this.

I am so proud of her. Not because she has another opportunity to win a competition, oh no, but for her willingness to be inconvenienced to help her coach out and even the rest of the team. If anything, her first speech (which is amazing), now will have to share the energy and effort with this last minute addition and will not get all of her attention on this eve of the competition.

Often times in our self centered culture, most of us would never take on something so last minute unless we had something to gain. I know that her intentions for doing this has nothing to do with herself, but has everything to do with what someone else needed at the moment.

Oh, I know that was such an encouraging moment for you.

Such a challenge for them to learn to be others-centered and not so focused on me.

Thanks for that glimpse!

What a giving heart she has! Makes a momma's heart proud doesn't it?

She is absolutely precious.

Great post, Chris. Thank you for sharing! I'd love to meet your daughter :)

(My Balcony girls are 11 yrs. old. I started mentoring them when they were 8). sandy

She is a gem. Can't wait to hear how it went.

Chris, I am always blessed whenever I decide to come by here!
What a beautiful post...and a beautiful young lady!
You said it all so well...although my youngest is only eight and a half, she is growing in so many ways so quickly. I know in just a few years she will be a teen...and it was encouraging to read about your conversations with your daughter and her growing wisdom and caring heart!
Blessings!
~Tammy

Your daughter is darling and she has a pretty heart! I hope she does well on both speeches, as well as you have done in raising her! Such a sweet post!

Beautiful post, Chris. Your daughter sounds like an amazing young lady whom God is using. Praise Him!

I love this post, Chris. It is encouraging to hear of God's faithfulness to our children if we are faithful to honor Him in our parenting. What a special young lady she seems to be!

She is such a precious girl. Your post jerks at my heart strings! Thank you for sharing, and I hope all went wonderful for her.

oh...now I see why that wisdom quote especially clicked with you. I love that quote as well!

Oh, God's is indeed gracious to us! What a darling girl you have!