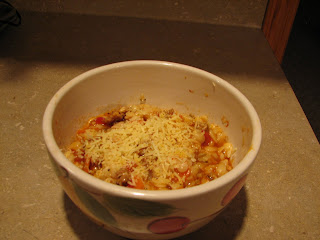 This morning I placed the ingredients for Italian Sausage Soup in my crock pot, and through out the day it filled my home with the smells of my favorite Italian restaurant.

All five of my kids love this soup and it is a nice change from your more traditional soups. It is great on a cold snowy day (like today), and also the recipe can be easily doubled for a crowd.
Makes 8 servings


Update on my daughter's speech competition since so many of you asked (thank you!):

Before I dropped Lauren off at the high school early Saturday morning, she told me she was nervous. As I drove down the street the couple blocks to the school, I told her that she had already done a really great thing as far as we were concerned. But, I grabbed her hand and we prayed for her day.

Lauren was scheduled to perform the first speech (the one she agreed to do the night before) at 9 am. It was in the story-telling category. She called us shortly after she had received her score and shared with us that she had received the highest possible score, a "1". We all shouted with joy for her and at that point it didn't matter to her how the rest of the day went.

But, later that afternoon shortly after she gave her speech in the acting category, she called again to tell us she had received another score of "1". We were all so happy for her. She had worked very hard on this speech using an accent throughout the entire speech and having to break out in song at what point, and tears in the next.

She will now compete in two weeks at state.

Hi Chris - the soup sounds so yummy. I think I can smell it - LOL. That is the greatest news about your daughter - wow! Plz let us know how she does in state. Def. confidence boosters!
My little Abby wrote an essay called, "What my Mother means to me" and she placed 3rd in the district. We just found out she also placed in state (OR) and is going on to nationals! Woo Hoo! (I'll keep you posted).
Fun times ...
Sandy

"cold & snowy day" - it was 94 degrees when I picked my kids up from school this afternoon!

It's supposed to cool off to around 70 tomorrow!

But the soup does sound good for another week!

Tell your girl congrats. Not just for her scores but on pleasing and being blessed by God.

Just got home from the airport with my sister and thought I'd pop in before I headed off to bed.

Your soup soups great. Thank you for sharing.

It is great to see what L has grown into. I can still remember her in my 1st grade cabin two years in a row. I know that you and PM have done a great job showing her a Godly role model and could expect nothing less. Congrats on a great day of speaches and to raising a beautiful women of God.

Brings back so many fun memories of Molly's speech contests. I kind of miss that stuff. I'm so excited for Lauren and hope she has a great time at state!

I'm so excited for Lauren! A great big congratulations to her!

You soup sounds wonderful. We love soups at our house so I'll definitely be putting the ingrediants on my next grocery shopping trip!

That is so awesome! I'm so happy for her :) Those are some fun days, I remember band and choir competitions. It was so fun to meet kids from other schools. I'm glad she had such a wonderful day! And she's off to state!

I'm going to have to put that soup on the docket for supper next week. Looks great!

This soup looks yummy, perfect for the cold weather we are having.