The end of the Year..oops I mean hair 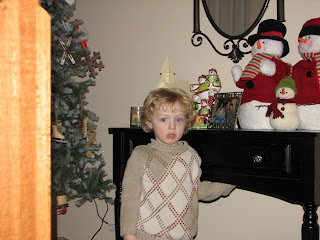 Once upon a time my youngest son had a head full of cute blonde curls. 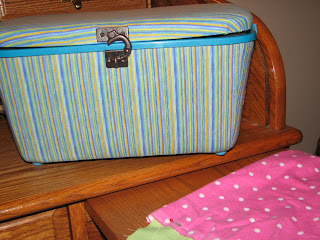 But then he discovered the scissors in his sister's new sewing basket she received for Christmas.... 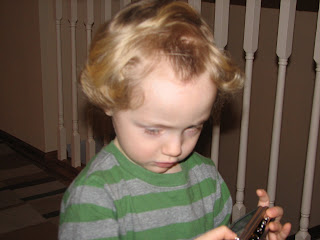 and yep you guessed it, he did this. It was hard to be upset, because after all it was only hair and he isn't the first child in my household to do this. I was mostly thankful that he did not hurt himself or cut anything that doesn't grow back. :)

So without further delay I would like to introduce you to the new Coleman. He had to call his dad in California and fill him in on his new look. 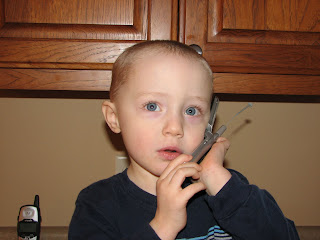 That third photo is priceless. It almost looks like he has the front of his hair pulled back in a clip. The new hair cut really grew him up. He looks like such a little boy now, not a toddler.

Big smile Chris! I have to confess to having given my little sister a new "do" when we were growing up too. Then I did my own hair!
He looks all grown up with his new haircut.

He is still too cute, curls or no! But he sure looks like a big boy now.

Not one of my kids ever did cut their hair when preschoolers which really surprised me seeing as their aunt was a hairdresser and their grandpa a barber.

Somehow I escaped the "Look Ma, I cut my own hair" episode with both girls- my oldest is five so I think I'm out of the woods! Um...except if they do this on another level as teens! ;)

Ooh--he looks so cute--older, I think. Seems that we have had a similar experience. My daughter decided that she needed bangs--real short ones--on New Year's Day:)

Oh, his poor sweet curls. But he looks cute now too!

Mary, mom to many

he will always be adorable no matter what hair he has!

But, isn't it amazing that kids never hurt themselves do that? They have such skill and steady hands and determination...

Oh, he's just SO adorable. He couldn't have gotten in too much trouble for doing this... just look at that sweet face!!!

His new haircut is so cute. It really grew him up!

Well I think he looks totally adorable. I use to teach preschool and you would not believe the number of kids who did that to their hair. In fact I think more do, than dont.

Glad you captured it for memories!!