Both are growing too fast! 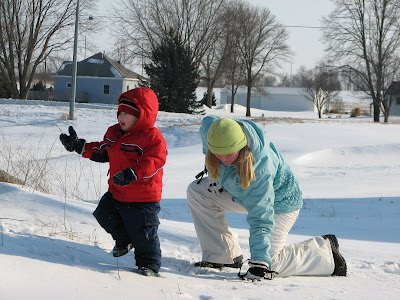 Some days the difference in age between my oldest and youngest is difficult. A toddler and a teenager, need I say more. They both have very demanding needs, one physical, the other more mental.

But then there are those days, like today, and this day in the snow several weeks ago, that their age difference is a beautiful thing to behold. In the picture above my oldest followed my toddler around the yard and stopped at every point he did to look at whatever he wanted to. He led, she followed.

Today, she was home from school. He stayed with her for several hours while I was away. I came home to a plate of chocalate chip cookies that she helped him make (wink) and the two of them curled up on the couch, his legs tucked between hers asleep.

Both are growing too fast!

That is so cute! I can't believe how fast they are growing up either. I feel so old!

She's a real gem, that teenager of yours! He won't remember much of this time with her, but the bond will be there and he will just know he adores his big sister for some reason.

Sarah@Life in the Parsonage said...

My little bro and I are 11 years apart. I wouldn't trade it for anything. I probably annoy him occasionally, with my mothering, but the relationship we have is so unique and close. I look at the pic of your two, and anticipate the bond that will continue to grow between them!

Their relationship is so precious!

That is so sweet and beautiful. I have a 23 yo and a 4 yo, and when they are together it brings tears to my eyes!
God is indeed good!!
Amen.