I have intentionally not posted anything over the past week until yesterday. I have had this post hanging around as a draft throughout the week. My mind has been everywhere but here.

One week ago, my husband and I attended the funeral for a little guy we did not know. His memorial service left me realizing once again how precious life is and how easily I take so much for granted. I came home weary and completely sick of all of my selfish concerns, you know all the stuff that weighs on us that has no eternal value what. so. ever. His precious young life, lived so courageously, had impacted so many in less than three short years. I wondered if my own much longer time here so far (life) has had such an influence?

On Sunday afternoon a community not far from us was changed forever by a devastating tornado. My family and I clueless to what was taking place so close, sat and watched the storm roll through. We later realized that most were huddled in their basements waiting for it to pass. We stood stunned at the pictures broadcast that evening and how quickly so many lost so much. My heart has been so heavy this week. I have received several emails asking us to pray for families and extended families who have lost their homes. Sarah has given us a glimpse of the devastation through her blog.


I have spent the week trying to get things caught up in my own home before Summer hits, and yet in the midst of it, I find myself looking at all this "stuff" as a weight. I find myself worried about things that don't matter. I sense God drawing me in close and whispering this stuff is not eternal, don't value it.


My kids have come home this week from their respective schools each talking about how they personally want to help. The school's have provided ways that the kids can give towards helping those impacted by the tornado. Even our little league is asking the players to consider donating equipment.


Hunter (7) sat down one morning looking at his flimsy plastic box which he is currently using as his piggy bank and stared at the crisp five dollar bill laying across the pennies, nickels, and dimes. He looked up at me and said, "mom, I really want to take money to school, but I was saving my money for summer vacation and I don't know what to do?" I told him that it was his decision, but I also understood how hard these choices are. I noticed a piece of paper sitting next to him. After I returned from dropping my kids off at their schools, the piece of paper was still sitting on the table, and the piggy bank was still full of pennies, nickels and dimes. 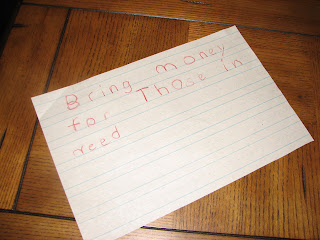 We went through the same thing here last month. The next town over was devastated. I didn't know it had happened until 3 hours later, when I saw it on the news. We know many people who were slightly affected, but so many more lost everything.

It's wonderful that your children want to help. I find children let Jesus shine brighter through them than adults do during times like these.

It has been a week of reflection. I loved how SC Chapman put it, something to this effect: we'll look for the glory of God how ever it shows up.
Makes you really remember to keep your lamp burning in anticipation.
Hunter's note is priceless.

How absolutely special this is. I pray that my kids learn from me the way yours are obviously learning from you. Good job Mom!!

What a great reminder Chris. Perspective changes everything. Hunter's note is precious.

What a sweet note. You are doing a great job making your kids aware of others' needs. God will be honored!

What a precious thing to see written in his handwriting. I love how their hearts are tendered for those around them who are hurting. I also love how times like these seem to help me sift through the "stuff" (possessions as well as priorities) and discern what's *really* important.

What a sobering reminder; thanks, Chris.

I missed a lot while away. Sweet sweet words shared by your son. I agree...sobering.

there your heart will be....